Followers of the order of the Benedictines, the Olivetan founded their monastery in 1313 when Bernardo Tolomei (1272-1348) constituted a religious community with the name of the congregation of Santa Maria di Monte Oliveto, on the homonymous mount halfway between Siena and Arezzo. In 1319 the foundation received approval from the Bishop of Arezzo Guido Tarlati and was included in the Benedictine rule; The following year began the construction of the monastery and in 1344 the Olivetan congregation received confirmation from Pope Clement VI (1342-1352); Then in the mid-seventeenth century there were six Olivetan monasteries in Tuscany. 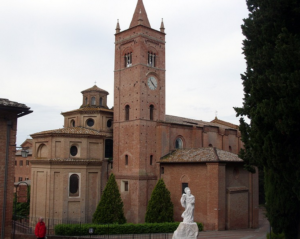 The monastery is accessed through a medieval palace in red bricks, reached along a drawbridge and overcomes by a massive quadrangular tower equipped with Barbicans and battlements. The construction of this building, used as a fortified entrance door of the monastery, was begun in 1393, to end in 1526 and then followed by a restoration in the nineteenth century. Above the arch of entrance is placed a glazed terracotta, depicting the Madonna and Child surrounded by two angels, attributed to Della Robbia; 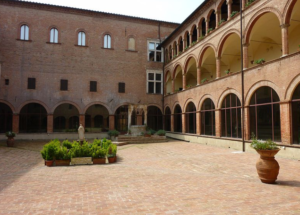 At the end of the avenue is the bell tower, of Romanesque-Gothic style, and the apse of the church that has a Gothic façade; In the apse area was placed in 2009 the statue of San Bernardo Tolomei, by Massimo Lippi. 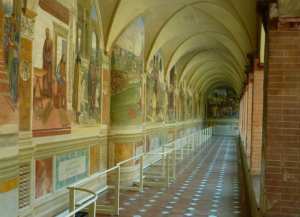