Arezzo was built in the pre-etrusca era in an area inhabited since prehistory, as demonstrated by the discovery of stone tools and the so-called “Olmo Man”, dating back to the Paleolithic, occurred near the hamlet of Olmo during the excavation of a short tunnel of the railway line Rome-Florence in 1863.

The area located in the northern part of Valdichiana where the Casentino and Valdarno meet, is in fact a natural passage for those who want to cross the Apennines. There are also reports of stable settlements of the pre-etruscan period in an area not far from the current urban area, the hill of San Cornelio, where traces of a wall of difficult dating have been found because it was overwhelmed by the mighty Roman walls. The Etruscan settlement rose on the top of the hill of San Donato, occupied by the present city. It is known that the Etruscan Arezzo, called Aritim (Latin Arretium), already existed in the 9th century BC.

Monuments and places of interest 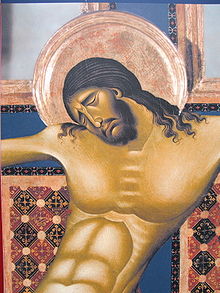 Detail of the wooden crucifix in the church of San Domenico 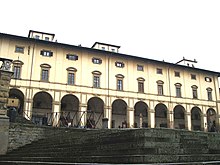 Logos of Vasari in Piazza Grande

Basilica di San Francesco: The Bacci Chapel contains the fresco La Leggenda della Vera Croce, by Piero della Francesca.
Santa Maria della Pieve (the Pieve), with a tower 59 meters high, also known as the bell tower with a hundred holes, in the archivolt of the main portal you can admire the sculptural complex polychrome stone of the twelfth century depicting Cycle of the months and inside the polyptych of Pietro lorenzetti and the bust reliquary of San Donato.
Church of Santa Maria a Gradi, designed by the abbey with frescoes and choirs of the seventeenth century and an ancient crypt.
Church of Santissima Annunziata, known as Madonna delle lacrime with works by Giorgio Vasari and Pietro da Cortona and fresco of spinello on the façade and fourteenth-century portal.
Church of Sant’Ignazio, annexed to the former Jesuit College; deconsecrated, it is the venue for exhibitions and concerts.
Church of Sant’Agostino, built in the 13th century and modified in the 18th century.
Santa Maria delle Grazie: a 15th-century Gothic sanctuary with a Renaissance portico by Benedetto da Maiano; marble altar and enamelled terracotta (late 15th century), an unusual work by Andrea della Robbia depicting in the tympanum Madonna and Child between two angels, in the niches the Saints lorentino, pergentino, Donato and Bernardino, in the paliotto la Pietà; inside a fresco of parri di spinello (Madonna della Misericordia).
Roman Amphitheatre of Arezzo
Monument to the Fallen of the Risorgimento
The urban cemetery
Casa Vasari 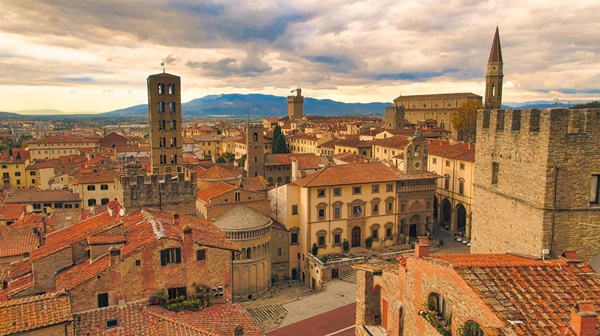