The first news on Salci date back to 1243, the year chosen by Frederick II of Swabian to define the boundaries of the domains of Castel della Pieve. The marshy adjacent lands facilitated a prosperous agricultural activity giving rise to a scattered settlement. A large reclamation project was carried out in 1780 – the duke of psalms was Pio Camillo Bonelli – with the works of channelling the tributary Tiberino, tresa, towards the Arno. The road to the village was carried out in 1834 on the medieval track.

Until the middle of the last century Salci had about 1500 inhabitants, then began to depopulate, the last resident was a priest and after his death began the decline and abandonment. Today the complex, largely privately owned, is in a state of extreme degradation, it is not recommended to visit it for security reasons. 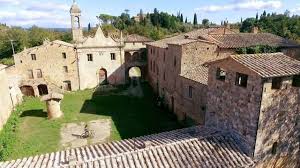