Inhabited since prehistory, the Castilian territory experienced a first period of flowering with the Villanovian era.
The inhabited nucleus of Castiglione developed in Etruscan times, already starting from the VI century B.C. fundamental crossroads between the two lucumonias of Arezzo and Cortona, the centre stood on the top of the hill, as evidenced by the archaeological excavations carried out in the area of the Torre cassero. The Etruscans first reclaimed the Val di chiana, crossing at the time by the river clanis: this flowed in the opposite direction of the current Master Canal and constituted an important waterway. In the Castilian area there are numerous archaeological finds, including the famous Brolium deposit, found in the 19th century in the homonymous village, and made up of a large quantity of bronzes.

The panorama of the communal territory in the post-war period was long devastated, to the point that during the fifties castiglion Fiorentino experienced a notable demographic decrease. With the economic “boom” of the 1960s, economic conditions improved considerably, making the town a flourishing agricultural area, a phenomenon that has also been reflected in a demographic recovery.

In 2007 castiglion Fiorentino was awarded by the Touring Club Italiano with the recognition of the Orange Flag.

The Pinacoteca Comunale, housed in the premises of the ancient church of Sant’Angelo. There are corals, religious objects, local ceramics and goldsmiths, as well as paintings of the Umbrian and Tuscan school
The Torre del Cassero, which dominates the city and stands on the oldest inhabited area of Castiglione Fiorentino. Rebuilt during the domination of Perugia around the mid-fourteenth century (the small casseretto at the apex of the Tower is 1350), the Tower was built on the basis of a previous Etruscan structure
The Praetorian Palace (1412), hosting the Municipal Library and the Archaeological Museum. The latter conserves mostly bronze or terracotta finds from the Etruscan, Roman and Medieval times
The loggias of Vasari (built in 1513 and only later retouched by Vasari), located in the Piazza del Municipio in front of the Town Hall. They overlook the Valle di chio and the Collegiata;

In the municipal territory

Church of San Francesco, Romanesque-Gothic construction of the end of the XIII-th century, which preserves among others a valuable Saint Francis of margaritone of Arezzo;
Pieve di San Giuliano (15th century) and the Collegiate Church of the same name, built in the 19th century, in which are preserved a Madonna of Bartolomeo della gatta, a terracotta robbiana, a table by Lorenzo Credi and a Madonna Enthroned by Segna di Bonaventura;
Church of Sant’Agostino (formerly an Augustinian convent), dating back to the 14th century;
Church of Sant’Angelo al cassero, ancient building of the XII century, frequented by remarkable works of Giorgio Vasari;
Church of Santo Stefano (or of San lazzo), built by the Company of Santo Stefano in the fourteenth century and with walls frescoed by a valuable fourteenth-century cycle, with Stories of Santo Stefano and Stories of the Passion.

In the municipal territory

Sanctuary of Our Lady of the Bath, built in the locality noceta in the sixteenth century, in the place where, according to tradition, the Madonna appeared and gushed a curative water source;
Parish church of Saints Ippolito and Cassiano retina (Rètina is, according to some authors, the ancient name of castiglion Fiorentino), today Church of the Capuchins, built on a thermal building of late Roman, of which there is information in the archives of the diocese of Arezzo since 1039;
Pieve di Santa Maria a chio in Pieve di chio, whose first citation dates back to a donation of 1063 to the Abbey of camaldoli of the parish by the Marchiones, local feudal lords;
Pieve di San Miniato di Ruccavo, which has been known since 1105 and of which there are only ruins embedded in a farmhouse near restaurant;
Pieve di San Nicola di Ruccavo, near the church and of which remains ruins dating back to the twelfth century;
Abbey of Saints abbondio e abbondanzio , of the twelfth century, whose ruins rise in the wooded areas of the mouth, the mountainous area of the municipality of castiglion Fiorentino towards Arezzo;
Abbey of San Parteniano (XII century), whose ruins rise near ristonchia;
Largnano Abbey, first mentioned in 1147 and now in ruins, in the woods near Ranchetto;
Abbey of Sant’Andrea del Pozzo in Castiglione (12th century) in La Badia;
Monastery of San Bartolomeo della noceta (13th century), now parish church of the locality noceta; 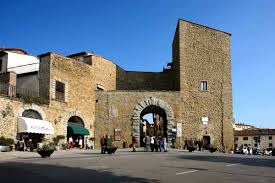