Already populated in Roman times, Civitella became a Lombard stronghold and there was built the castle that is still visible today. The main attractions of the village of Civitella are undoubtedly the ancient Rocca, a true symbol of the town, and then the fourteenth-century Praetorian Palace and the Church of Santa Maria Assunta, erected as a Benedictine priory in the eleventh century, Completed in Romanesque style in 1252 and restored after World War II. Inside there is a tabernacle with the effigy of the Madonna and Child in majolica, from the school of Robbia;

The Castle in particular was erected in 1048 and surrounded by an imposing circle of walls; during the Second World War it was transformed by the Wehrmacht into a Nazi headquarters, to be then semi-destroyed in an Allied bombardment of 1944. 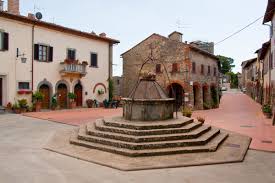