The “Grancia di Cuna” is one of the best preserved examples of medieval fortified farmhouse, in addition to being one of the most unusual and interesting architectural complexes, in the province of Siena.It Stands where already in the 12th century there existed a Hospital dedicated to welcome and give assistance to pilgrims and merchants passing along the Via Francigena that close, crossed the Arbia. Later, it was discovered, thanks to a document of Pope Eugene III, that this building belonged to the Abbey of towers 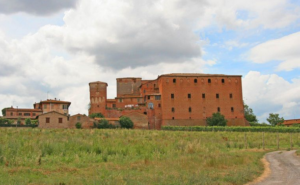