The Horti leonini are a public garden located in the ancient bastions of San Quirico d’orcia (province of Siena).
Sprung around the 1581 on a land that Francis de ‘ Medici had donated to Diomede Leoni, they take their name from their owner. The Horti have retained the original structure to this day, constituting a well-preserved example of classic Italian garden and a model of accommodation that had developed in the following centuries.
The Renaissance Garden of the Leoni had in the past the task to welcome the pilgrims tired of their journey.

The square, where a medieval tower was destroyed during the last World War, is located in the middle of a forest of secular holm-oaks crossed by winding paths.
Among the sculptures present in the park, characterized by a symbolic connotation, there are two lion heads placed on the entrance portals, and the head of Janus located on the border between the wild and the formal garden.
The first allude to both the name and the power of the owner, while the head of Janus emphasizes the diversity of the two places that mark the limit.
The gardens of Leoni, which have been owned by the municipality of San Quirico d’orcia since 1975, are regularly opened to the public every day. The plant has remained unchanged until today through a series of conservative interventions operated by the municipality, under the direction of the Superintendence for environmental and architectural goods for the provinces of Siena and Grosseto. 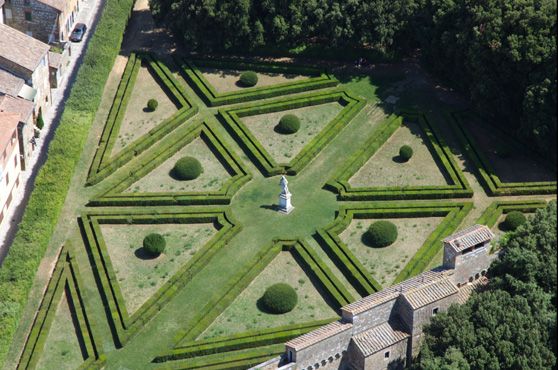