Of Monte San Savino, almost certainly of Etruscan origin, we have sure news only from the XI century when of this part of the territory were lords the ubertini and their consorts; it was just the alliance with the Florentines, stipulated between the branch Guelph of this family, driven out of Arezzo and sheltered in Monte San Savino (1287), one of the triggers of the long war between Arezzo and Florence culminated in the Battle of Campaldino. From 1289 Monte San Savino was thus placed under the protection of the Florentine republic, but in 1325, conquered by the troops of the bishop of Arezzo Guido tarlati, was almost completely destroyed. Rebuilt and repopulated, in 1336 it passed again to the Florentines, who in turn gave it to the Perugia. To these the castle remained until 1358, year in which it returned in possession of Arezzo. In 1384 Monte San Savino, together with Arezzo and its countryside, passed definitively under the rule of Florence, becoming the seat of vicariate (alternating with lucignano). From 1551 to 1570 it was given into a feud by the Grand Duke Cosimo I a baldovino and fabiano del Monte, brothers of Pope Julius III, and in 1604 to gianantonio Orsini. Returning to the possession of the Medici, it became the property of Prince Mattias, brother of Ferdinand II (1664), and then, from 1667 to 1697, the prerogative of Grand Duchess Vittoria della Rovere. In 1747 the community of Monte San Savino was finally reunited with the Grand Duchy.

In the spring of 1799 the town was among the centers of the anti-French reaction, which had as tragic consequence the dispersion of the flourishing Jewish community established in the area. Among famous people who were born in Monte San Savino we remind here Cardinal Giovanni Maria del Monte, then Pope with the name of Julius III (1487-1555) and the sculptor and architect Andrea contucci, known as the Sansovino (1460-1529). In the past, the economic activities of Monte San Savino focused on agriculture. In the early modern age, besides the traditional products, such as wheat, fodder, oil and wine, they were cultivated barley, hemp and flax, maize and legumes, while in the mountainous areas they produced wood for job and from coal; remarkable relief had the cultivation of silkworm. To the livestock (sheep and pigs) also connected a busy market; in the first half of the nineteenth century in the municipal territory operated finally a factory of fur hats and a dry cleaners. Today’s agriculture, which offers a varied production (wheat, sugar beet, grapes, olives, potatoes, tomatoes, beans, watermelons and melons), contributes to the economic resources of the area, even if the industrial and artisanal activities have known, over the past 30 years, a progressive expansion.

Of particular interest is the historical re-enactment, organized by the prologue association, which takes place every year the last week of June and which culminates with the big party on Saturday evening. This event evokes the investiture of Count Baldovino di Monte in the year 1550 and takes place with shows in the square, historical courtship and especially with the Palio of the neighborhoods, Jalta – Castilla – little port guglielmi and San Giovanni, who compete for victory in four races throughout the week, the famous games of the “big ball”, the “Hunt of Mount”, the “Tyre to the ropes”, and the gastronomic competition. The first edition of the district games took place in 2012. 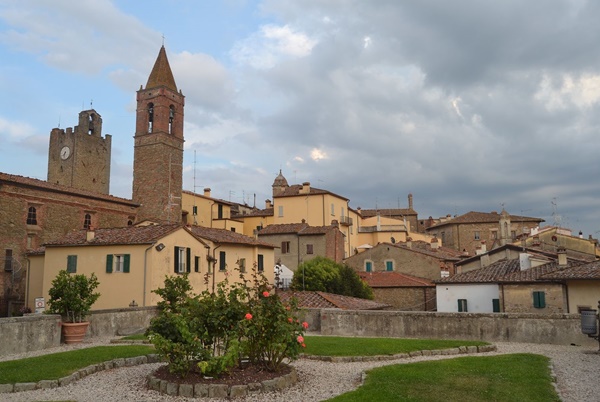