Museum of the Etruscan Academy of Cortona

The Casali palace, seat of the Etruscan museum of the city of Cortona, was probably built during the XIII-th century and was the residence of the family that from 1325 was the lordship of the city of Cortona. Among the ancestors of Ranieri Casali there was that Uguccio who drove out the usurpers of Arezzo in 1261, in the following decades was built the building, the restoration of the walls and the recovery of public and private structures after the serious years suffered in the years of occupation.

Most famous works of the museum

Maternity :Maternity is certainly one of the best known works of futurist painter Gino severini. performed in oil in 1916

Madonna and child among the patron saints of Cortona: Initially and erroneously attributed to Francesco signorelli, this painting was actually made by the well-known Luca signorelli at the end of the 15th century (1510-1515 ca). 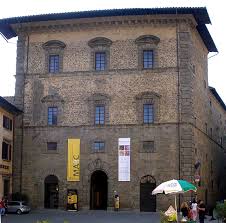