Sarteano is particularly important from the historical point of view. Located between Val d’Orcia and Valdichiana, the area of Sarteano has been inhabited for thousands of years. For this reason, Sarteano has a very rich archeology,in particular, some of the most important Etruscan tombs of Tuscany are located around Sarteano.

Traces of the Etruscan period date back to the 9th century BC. The first settlements occupied the highest hills, near the necropolis of Sferracavalli, along the road to Radicofani and then,in the area towards Castiglioncello del Trinoro where a vast necropolis demonstrates the presence nearby of a densely populated town.

The museum  was founded in 1997 and is housed in the 16th-century palazzo Gabrielli.

The lower floor of the Museum is dedicated to the stunning results of the excavations of the necropolis of the Pianacce, which began in 2000 and led to the discovery of a painted Tomb of great importance dating from the second half of the fourth century BC with unique scenes depicted on it. 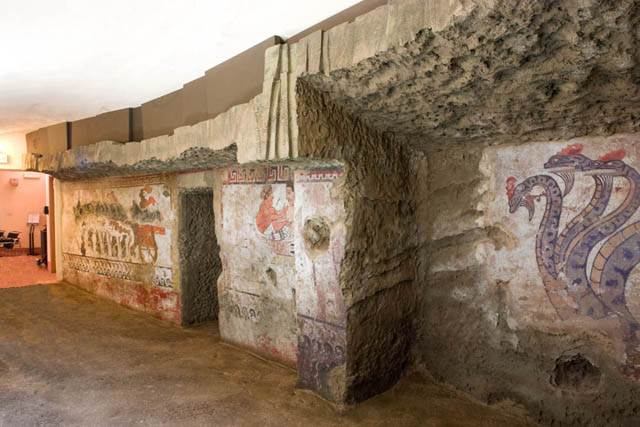 reproduction of the Tomb

The Tomb, open only on Saturdays by reservation, is documented through his perfect scale reproduction made with a unique technique in Italy.In the months from May to October the tomb is open at other times.
In the other rooms stand out other findings,always from the necropolis of the Pianacce.